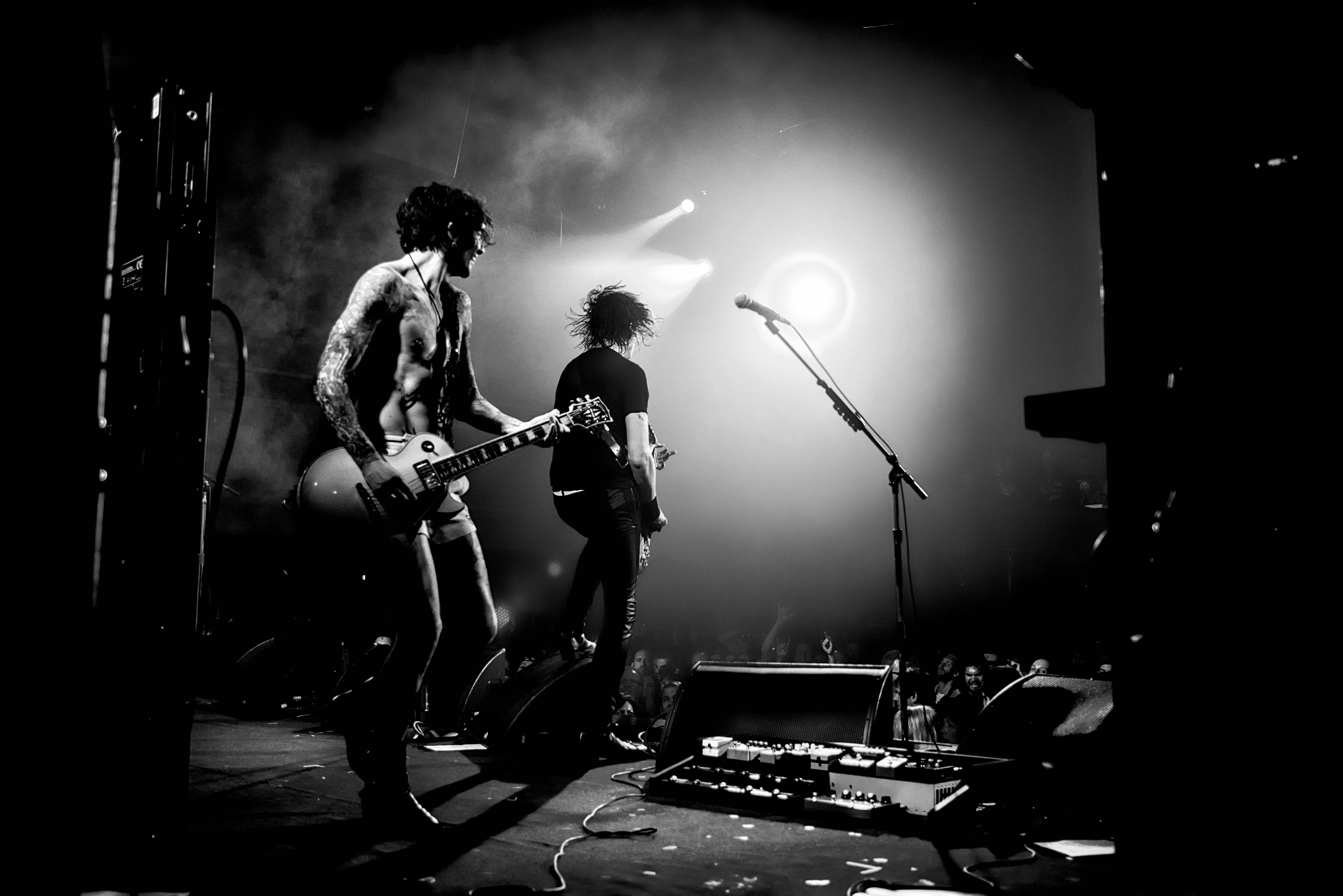 Darkness
The Darkness at Catalyst Club 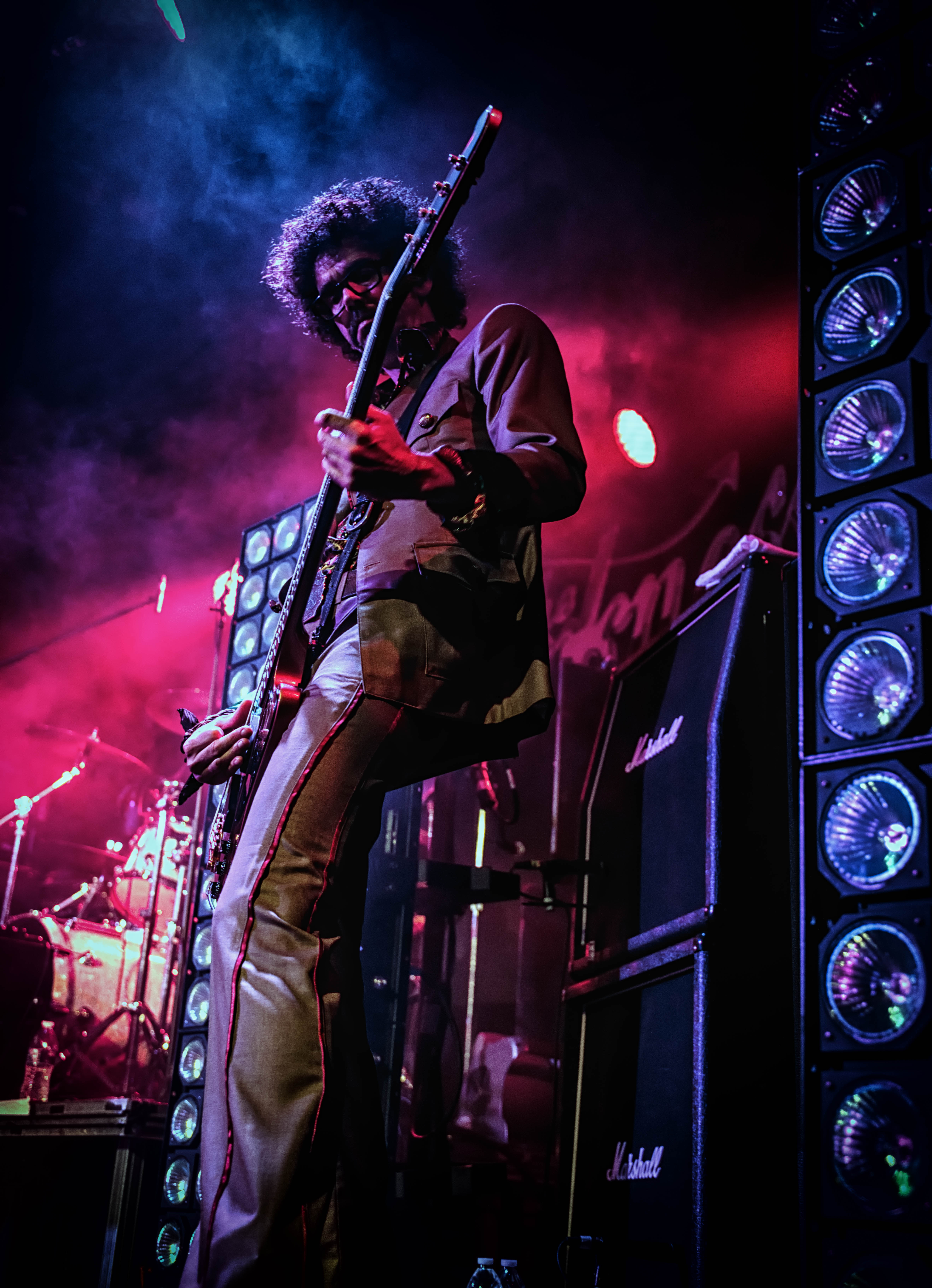 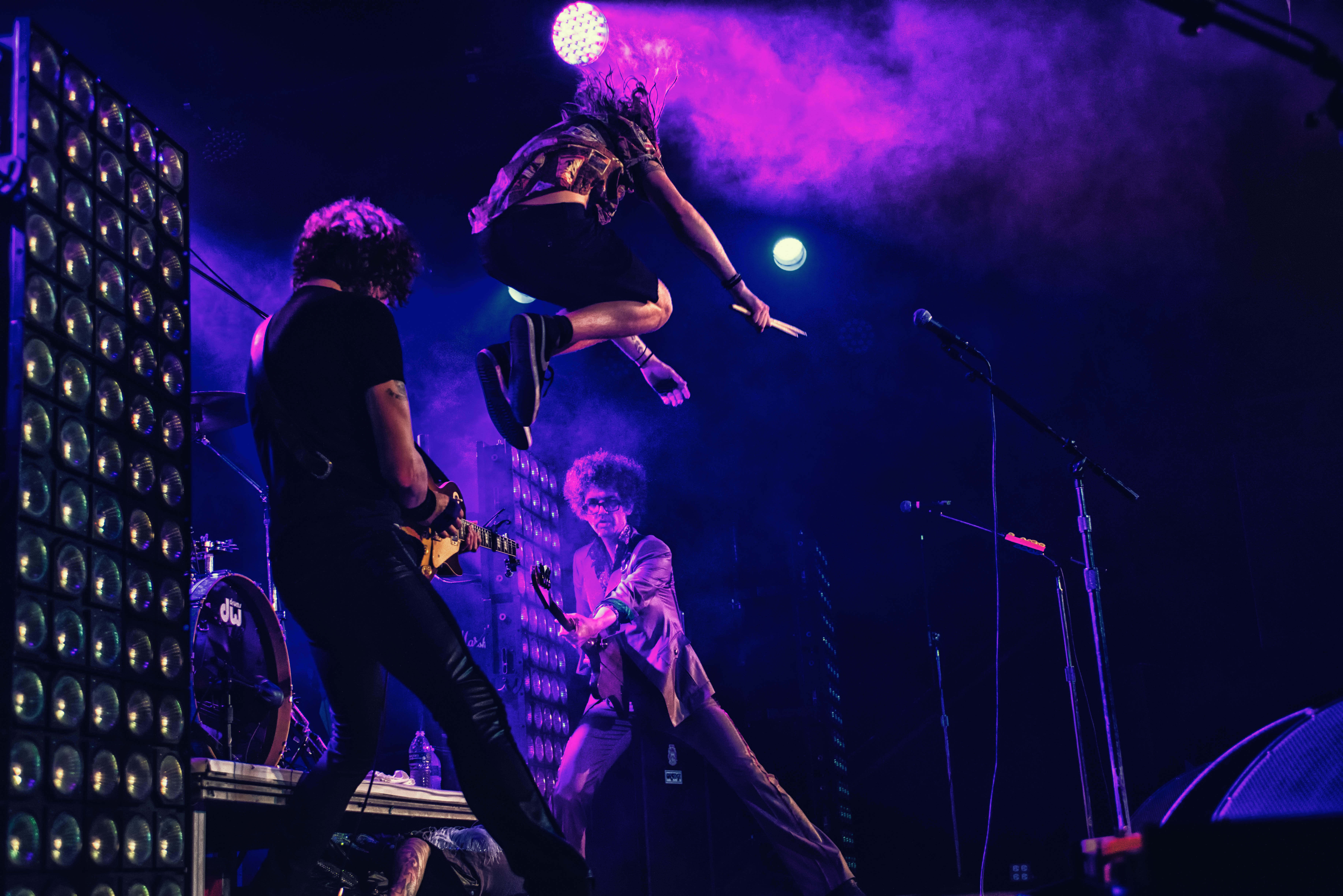 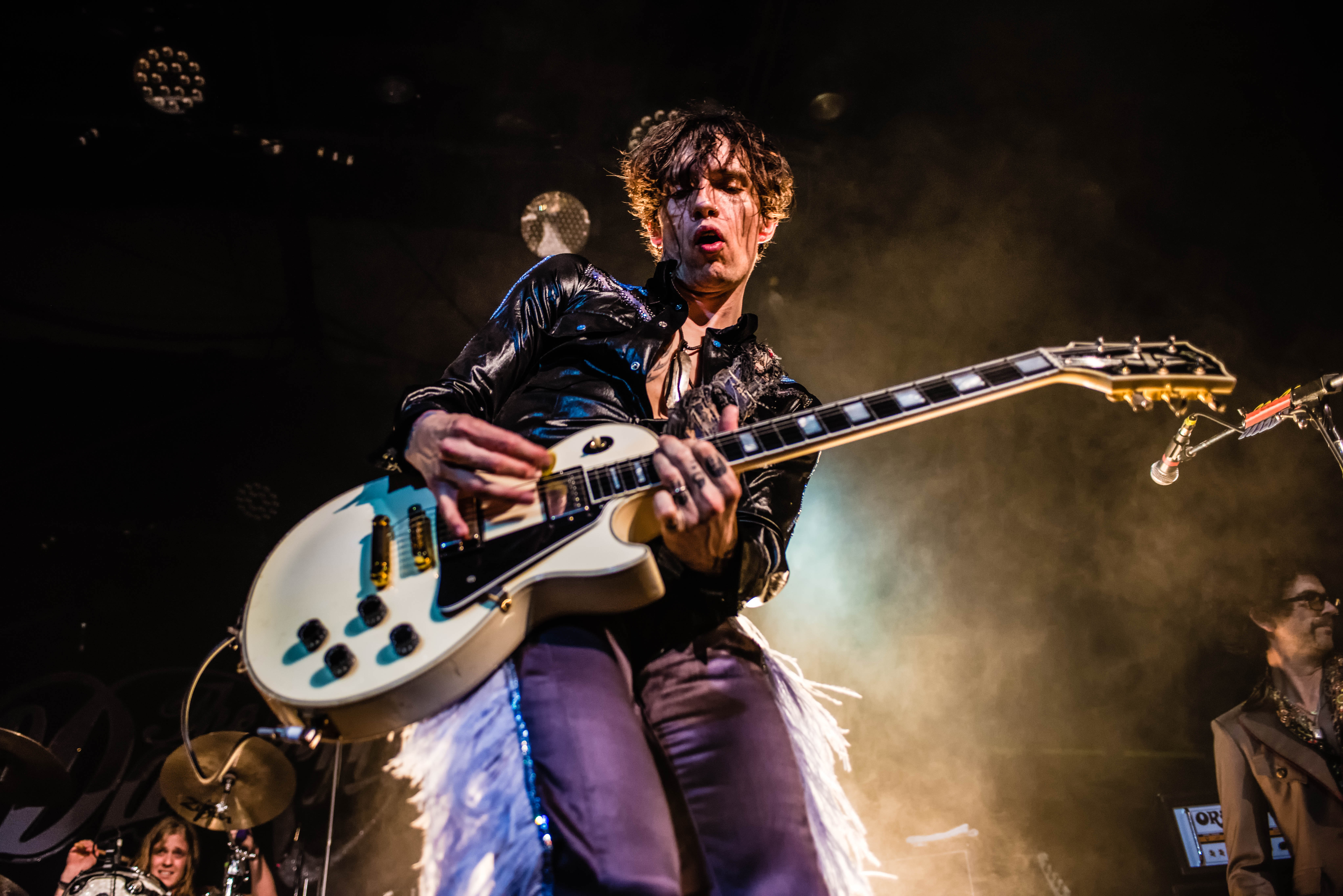 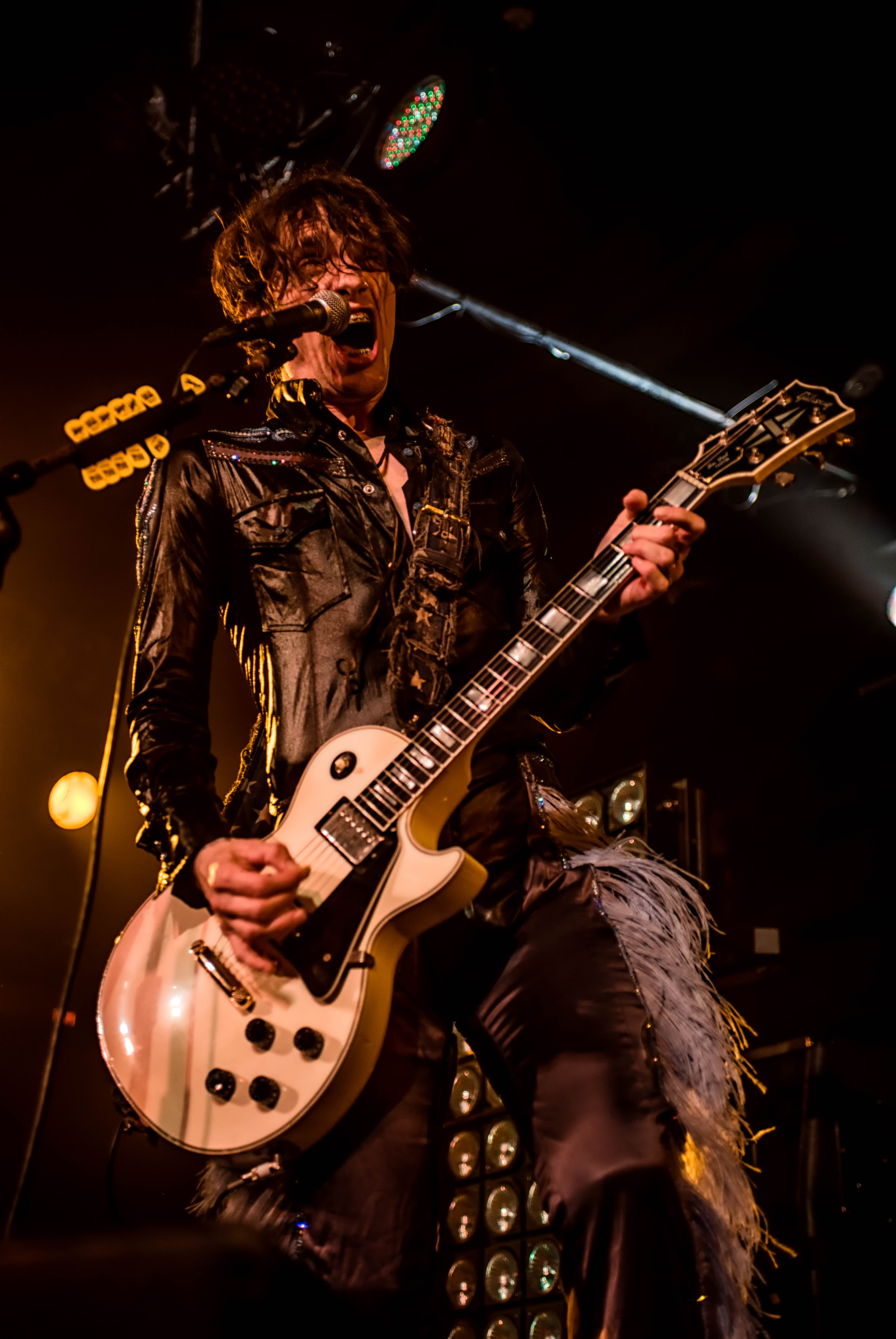 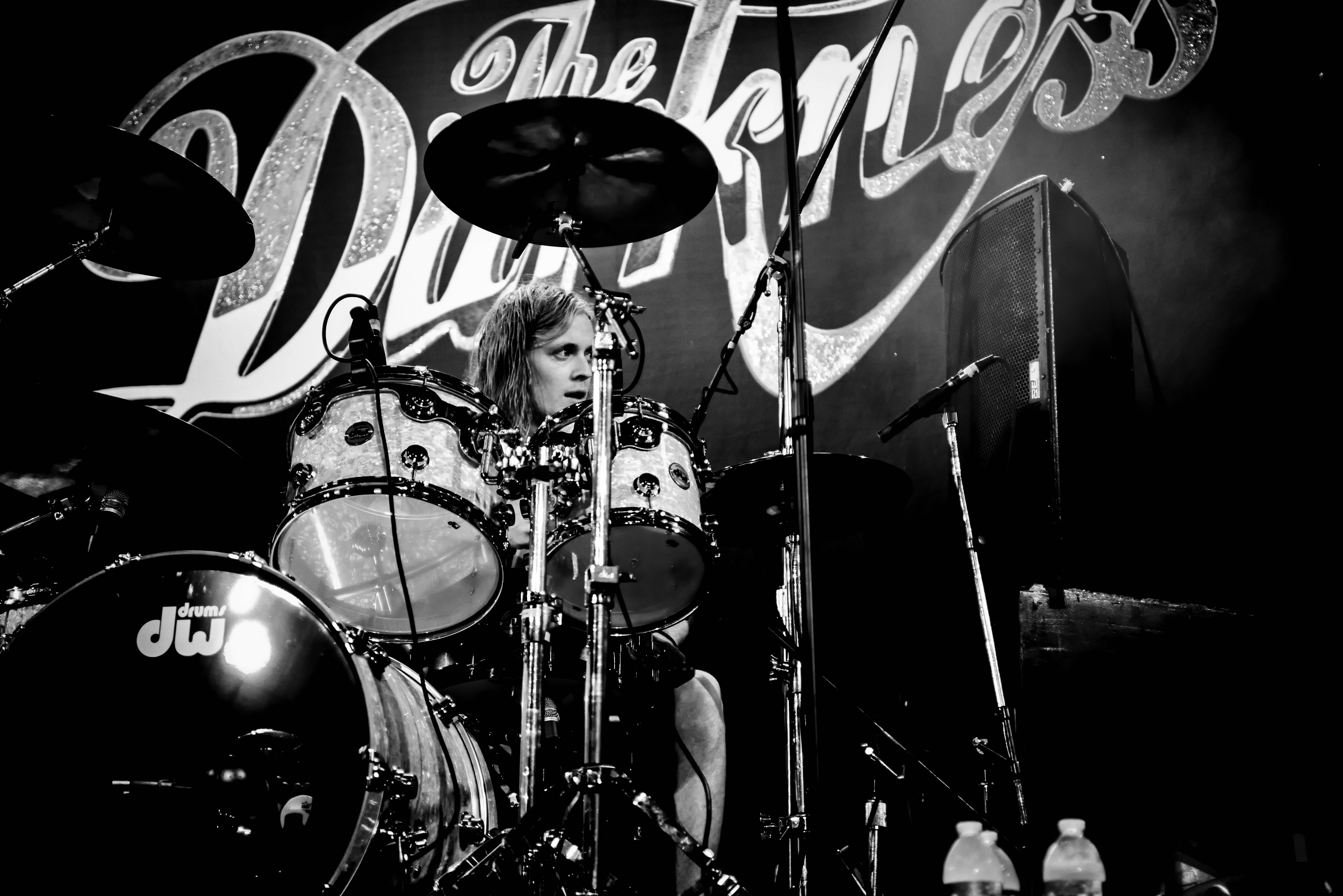 It’s been only a few months since I last saw The Darkness play The Regency Ballroom in San Francisco so I wasn’t sure if I wanted to make the drive 2 hrs south to the Catalyst Club Santa Cruz. I am so glad I did.

The last time I was at the Catalyst was way back in 1992 when I played there in Exodus. It’s a pretty small venue and a great place to see a band like The Darkness. I had seen them before at a small place at Slims in SF before Permission to Land broke big.

To me, The Darkness represents everything that was ever great about Rock and Roll. Justin is the last of the real rock stars. He is a great singer and performer and way underrated on the guitar.

The opening band was 3 young guys from England called The Raven Eye. They were energetic and had a decent look about them (except for the bass player, who wore his bass way too high). Their music was a little to Soundgarden for my taste, but the crowd liked them.

This was the first night of their tour, which they called Back In The USSA. The Darkness came on at exactly 10pm. They had an intro tape, which was some sort of Scottish folk sounding song. At The Regency show in OCT, they used Thin Lizzy’s The Boys Are Back In Town.

The first song was Givin Up from Permission To Land. Justin was wearing a cowboy hat and satin western jump suit along with matching fringed chaps. Great look. There were some sound problems and you couldn’t hear the vocals or Justin’s guitar but the crowd didn’t care. They were on board from the start.

Next was Barbarians from The Last of Our Kind. The sound still wasn’t fixed. Justing was hardly audible. He didn’t seem to mind. It looked like he was having fun and glad to be back in America.

Then my favorite Darkness tune, Growing On Me. The sound was getting better. The crowd (including me) was singing along to every word.

Then Mudslide from Last of Our Kind. – At the end of the tune, Justin asks someone in the audience if they know what this is. Everyone in the crowd – “IT’S A FUCKING MUDSLIDE!”

The Next song was Black Shuck. Justin removes the top part of the jump suit and proceeds to rip on guitar.

Roaring waters was next. The shirt part of the jumpsuit, since it wasn’t being worn, was causing the entire thing to fall down and by the end of the song, he was spending more time trying to keep his lower body from being exposed which I’m sure made it a little difficult to play the song.

Then Justin introduces the bass player, Frankie Poullain, who is going to play a little cowbell. The song was One Way Ticket. It sounded fantastic. Justin’s pants ripped and the girls in front were clearly turned on by the exposed ass of the great Justin Hawkins. After the song, he asked if anyone in the crowd had any black electrical tape. I swear to God, someone in the audience did. I was standing right in front and some guy hands him a piece of black tape. He taped the trousers up and proceeded on with the rock. It was a moment of hilarity and it was great. I fucking love that guy.

Next song: Love is Only A Feeling. At the end of the song, Justin switched places with drummer, Rufus Taylor(son of the great Roger), who stood up on the drum riser while Dan and Frankie made a bridge with their guitar necks. At the last note, he leaps over the bridge and lands on the down beat to end the song. Good times.

Next song: Hazel Eyes, a hugely underrated tune off of One Way Ticket. I love the chorus. The audience was singing along to all of the falsetto parts of the chorus.

Then it was Concrete from Hot Cakes. Great riff and catchy tune. The band was well into a fantastic rocking set. The whole place was rocking and for some reason, a pit was forming near me. It’s weird enough seeing a pit at a Darkness show but a pit full of middle aged dudes was even weirder.

During the next song, Get Your Hands Off of My Woman, the pit degenerated into a fight between 3 guys. The whole time this is going on, the security guy, who was right in front of me at the barricade was sleeping and missed the entire thing. After the song was over, Justing addressed the crowd and said “We are all friends right?” Everyone made up and the good rock vibes continued.

Next up was Stuck in a Rut, followed by the set closer, I Believe In A Thing Called Love, which of course, everyone sang along to.

They said goodnight, and the crowd chanted. They came back for the encore, which was Justin who had changed out of the cowboy outfit to only a pair of tennis shorts, playing keyboards to Friday Night.
After that was English Country Garden with Justin still on Keyboards.

The final song of the night was Love On The Rocks. Justin went out into the crowd on the security guy’s shoulders, like he usually does. He got back onto the stage, and they were going to end the song with Justin telling the crowd how nice they were and how great it was to be back on tour, thank you for being so kind, etc, but the crowd didn’t want them to leave. SO this song went on for what seemed like 20 minutes. The band extended the breakdown which included Frankie scratching his pick on his gold Anniversary Thunderbird bass like it was a turntable. Silly, yes but still a lot of fun.

That night was one of the best nights of rock and roll fun I have had in a long time. It was exactly what rock and roll is all about. Forget your problems for a couple of hours and have a blast. Every person there, did just that.

Please Darkness, Don’t stop doing this. You really are the last of your kind. I know it’s a cheesy thing for me to write, but it’s fucking true!